is  lecturer and research fellow at the Institute for Romance Philology of Ludwig Maximilian University Munich, Germany.

Daniel wrote his PhD thesis (in German) on ‘Island(s) in the Archipelago’ of Caribbean literatures (2013), published in a revised and extended version as Insel(n) im Archipel.(Paderborn: Fink 2017). In this monograph Daniel focuses on the textual constitution of islands (nissopoiesis) or archipelagoes (archipelagopoiesis) and its respective poetics in novels, short-stories, and poems from contemporary anglo-, franco-, and hispanophone Caribbean literatures (1992-2012).

Alongside his continuing research in the poietical constitution of island spatialities Daniel is currently writing a book on intercultural misunderstandings in literature.

Daniel is also a poet and literary translator of Italian and Spanish poetry.

is Senior Lecturer in English Literature at the University of Roehampton, London.

He is the author of Theorising Literary Islands (2016) and editor of Didactics and the Modern Robinsonade (2018). 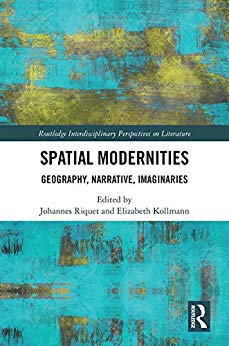 is Associate Professor of English Literature at the University of Tampere.

He is the author of The Aesthetics of Island Space: Perception, Ideology, Geopoetics (forthcoming with OUP) and the editor of Spatial Modernities: Geography, Narrative, Imaginaries (Routledge, 2018). He is currently working on a new book on the railway journey in British fiction and a project on contemporary representations of the transnational Arctic alongside his continued interest in islands.

Johannes Riquet’s research interests include islands, spatiality, the links between literature and geography, phenomenology, deconstruction, representations of magic, cinema, and railway journeys in literature and the arts.

is a Lecturer in Cultural Studies, Literature and Film and has most recently taught at the Universities of Essex and Roehampton.

In 2017 his PhD on representations of desert islands in post-war popular culture, supervised by Jeffrey Geiger and Marina Warner, was awarded with minor corrections. He is currently preparing his thesis for publication as a monograph and working on a new project on representations of blankness and nothingness. Barney has previously written about superheroes as sufferers of psychological trauma and on the Harry Potter novels as sites of Foucauldian heterotopia.

Barney’s research interests include ideology in popular culture, comedy and satire, football chants, representations of dreams, and literary and cultural theory. As an undergraduate, he studied Music at Girton College, Cambridge and continues to work in music education and as a freelance musician alongside his academic work.

GET IN TOUCH WITH US

is an independent scholar located in Tasmania, Australia.